Apart from an incident with a Weimaraner running towards us at full pelt which resulted in me picking Tia up to avoid conflict, today has been wonderful. We've seen several other dogs and she's been great. In fact, the last few days have all been wonderful. I'm finding that I'm not having to hide behind cars etc. with her anymore, as long as I can put some distance between her and the other dog, then it's all good!

She growled at one little dog, it came out from round the corner just in front of us, Tia gave one small growl and then stopped. We also saw a Miniature Schnauzer on the other side of the road, it was very jumpy, pulling on the lead and leaping around, Tia was also lunging but didn't make a sound. There were a few others too, I won't start listing every dog she didn't bark at but there's one more I want to mention because I was so impressed. Corners are usually the worst thing with a reactive dog because if there's another dog there, understandably it takes her by surprise. However, we turned a corner today and there was a small Labrador there and Tia didn't react apart from pulling on the lead.

The intent for starting this blog was really so I could note down when/where/why she reacted, but it's starting to become a log of all our achievements because she's doing so well. I can't even begin to express how happy this makes me, I'm just very, very proud of her.
Posted by Unknown at 13:53 No comments:

I'm starting to feel much more relaxed about taking Tia out again. It was quite stressful for a while, but the changes I've made in handling the situations have made it much nicer for both of us. By not trying to keep her attention on me when we see another dog using the "watch" command, she's much more relaxed too (which makes sense now I've taken the time to think about it - when you're scared of something, the last thing you want to do is fix your gaze elsewhere!) and she's definitely associating seeing other dogs with lots of yummy treats now!

On our walk yesterday, she was barked at by several other dogs in peoples' front gardens and she didn't bark back at all, she was on her 6 foot lead. We walked through the graveyard and saw another dog in there and she sat nicely and happily ate her treats which is a vast improvement from the Tia of a little while ago who got so fixated on barking that she'd never have been able to relax and accept treats.

Today in the park we saw a Miniature Daschund who was off lead and quite close to us, Tia was on her longline and she was completely fine about it. I think she wanted to play really, but I'm not allowing her to be close up to any other dogs while she's on the longline.
We saw a German Shepherd a little way away, and big, fluffy, pointy eared dogs are the ones Tia is most scared of. She was quite alert when she noticed him but not so fixated that I couldn't get her attention and she relaxed very quickly.
She also spotted the Jack Russell puppy that she was a bit funny with before and as soon as she noticed it she came straight back to me and sat down for her treat which is really great that she's made the connection.

The narrow road outside our house is always a difficult one because it's unavoidable and there's few places to duck into and hide. We saw a dog on our way home from the park today and she did growl, but my boyfriend took her out this morning and said they saw two little dogs on the other side of the road and while she did lunge a bit, she didn't growl or bark so it's not all bad.

I don't ever expect her to be okay with another dog in her face while she's on lead, a lot of dogs aren't, but to be able to pass one on the other side of a narrow road without any reaction at all is a realistic goal and one that I don't think we're a million miles away from anymore. The reason it felt like nothing was improving before is because it wasn't - I can't remember who it was that said "Madness is doing the same thing again and again and expecting different results." but that's where I was going wrong with trying to get her to focus solely on me. Getting a fresh perspective on it and changing our way of doing things has made a world of difference, and I'm sure the fact I now feel confident that what I'm doing is helping her can only add to that.
Posted by Unknown at 10:10 No comments:

I'm really proud of Tia. Yesterday we were passing a couple on a footpath who had a Springer Spaniel with them, Tia was on the longline but I had most of it coiled up and as they passed about 6 feet away from us, she was totally calm. No barking or even a growl! She did lunge towards him but in "wanting to play"-way just as they'd gone past us, she wasn't nervous in the slightest and it's so nice to see.
We passed a couple of Border Collies on the way home on a narrow road and she did growl at them. She doesn't seem to be barking anywhere near as much now, just growling and I do feel like that's an improvement.

We haven't seen any dogs today so I don't have much else to write. I'm really impressed with how much she's improved lately and wondering how much it has to do with maturity. I'll have to do some reading and write a separate blog post on that though!
Posted by Unknown at 10:24 No comments:

Update for the last few days.

It's been a few days again... Tia was wonderful over the weekend, I don't know if it was the heat or something but she was a very quiet girl. We met an off lead Springer Spaniel and a Collie, Tia was on a 6 foot lead and she didn't react at all. She was also on the receiving end of a very vocal Westie in someone's front garden and she totally ignored it. We saw a few other dogs on the pavements on Saturday and Sunday and she was quiet going past all of them, I was so impressed!

The quiet streak ended on Monday when we met another lead-reactive dog on a corner, it was unavoidable and they were barking at each other so there was nothing to do except walk off with her until she couldn't see the dog anymore.
She had a bit of a go at a Jack Russell today too, the street outside our house is very narrow and quite long so unfortunately passing another dog on our way to somewhere else is fairly common.

So the last few days have been a mix of successful and not so successful moments but I'm holding onto that weekend because it was great!
Posted by Unknown at 09:03 No comments:

Me, not Tia. I've only had a blog for 11 days and I'm slacking already!

Tia's been really good since I last posted. She did refuse to go in the park yesterday morning - there were lots of dogs in there and I think she was overwhelmed, but she was happy to sit by the gate and watch them while having lots of treats. She has also spotted a few other dogs on pavement walks and not barked as long as we turn round and quickly walk off before she has a chance to.

She's also been totally fine so far on the longline which is great! I've been taking it slowly and sticking to wide spaces so she hasn't been close to another dog while we've been using it but she's been around lots of dogs, including big ones, and she hasn't barked at all. This is another step in the right direction because I'm sure she knows she had a lead on but it's obviously long enough so that she isn't worried. That means I can work on slowly decreasing the length of lead that she needs to feel comfortable at a distance.

That's all I can think of for now, it's Saturday tomorrow though so I'm sure we'll be seeing a few more dogs around!
Posted by Unknown at 13:20 2 comments:

I've just realised I didn't update yesterday. We only passed two dogs, one was a Jack Russell Terrier and the other a Rhodesian Ridgeback. For some reason Tia barked at the little Jack Russell and ignored the Ridgeback beautifully, totally going against the usual pattern! Still, I'm very impressed with her for ignoring such a big dog.

I haven't been out with her today yet, I'm rather ill and got no real sleep last night, just a few weird delusional dreams, so she's just been out with my boyfriend this morning and I'll take her for a little walk this evening once I've recuperated a bit! The report I got from this morning's walk was that she lunged towards one small dog (on the other side of the road, as always) without barking at it and totally ignored another small one.

I'm also working on discouraging her from barking at other dogs out of the window while we're at home. It's a different situation from when we're out, I'm pretty sure she's being protective over what she considers to be her territory rather than being scared, but I think working on not barking at other dogs for any reason might help with the reactivity.
Posted by Unknown at 08:32 No comments:

The distance at which Tia reacts to little dogs is definitely getting smaller. We were walking on the other side of a narrow road behind three small dogs earlier today and she's now happy to stand and watch them quietly while receiving lots of treats for doing so. That's been several small dogs in the last few days that she's not reacted to, so I must be doing something right!

She did bark at another Staffy but that was my fault, I could have waited behind a car but I chose not to, thinking that the road was wide enough for it to be enough distance for her but it wasn't. I think it's better to over estimate her threshold rather than under estimate it like I did today, so next time I'm in a similar situation I'll guess that she will react, rather than guessing she won't.
Posted by Unknown at 12:32 No comments: 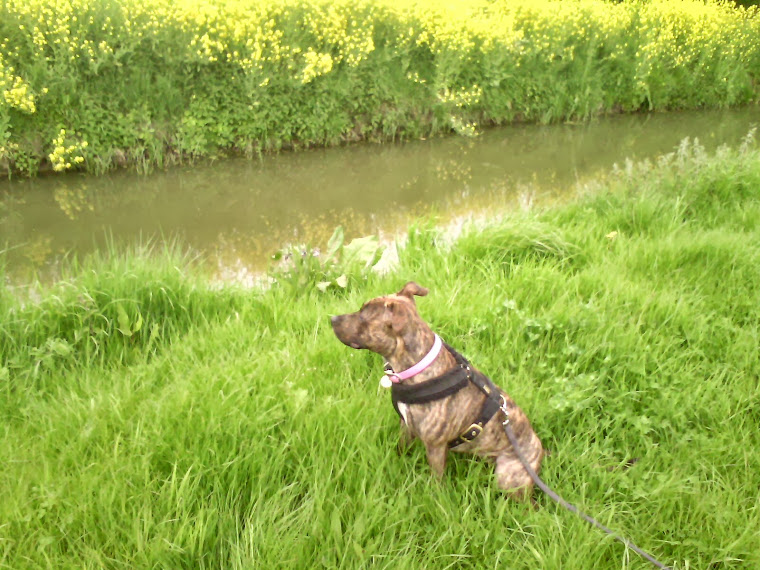